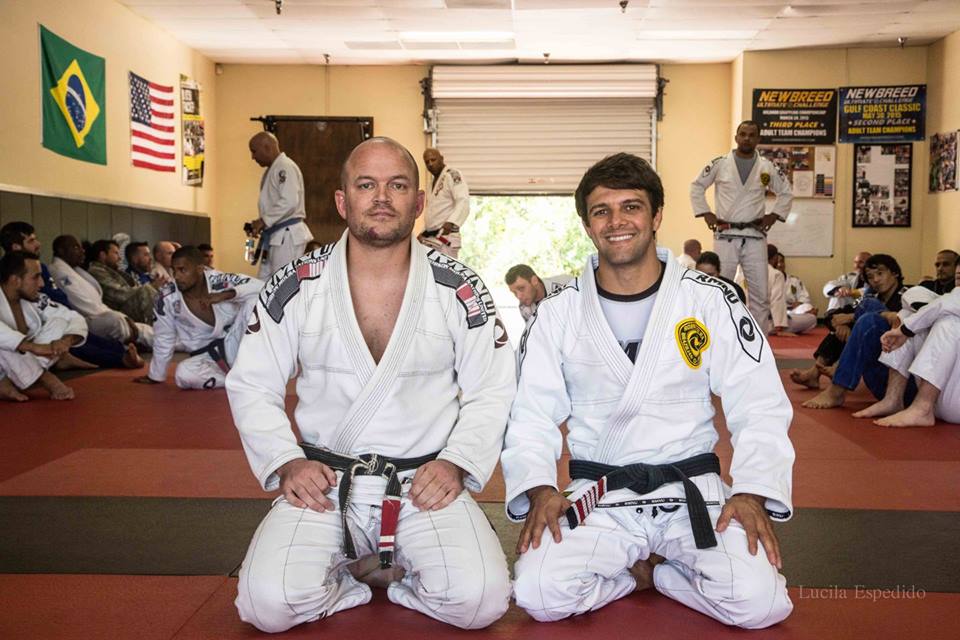 The sport history of this ‘Carioca’ begins in 1988 at the age of 10 when he started training Jiu-Jitsu in his hometown of Teresopolis (a small town in the mountains of Rio de Janeiro, Brazil). His first Brazilian Jiu-Jitsu teacher was Jucao. Robinho was supported and encouraged by his family, especially his father. Robhino quickly grew his skills, becoming a champion of many competitions, and collecting a number of regional titles. When his instructor Jucao moved to Rio, Robson started training under Master Andre Pederneiras and Wendel. He continued to grow his skills and abilities, achieving national and international titles, becoming very well respected and esteemed. He is considered to have a very proficient and competitive way of fighting. By 18 Robson had achieved his greatest dream by becoming a Black Belt and today his is one of the most valued players in Brazilian Jiu-Jitsu.

In addition to Elite Brazilian Jiu-Jitsu, Robson directs two academies in Brazil that are run by his accomplished black belt instructors.

For those of us who have been around Elite BJJ for even a little while, we quickly see that it’s not just a business, or a job, or a place to get in shape. It’s a place where teammates and friends come together and unite around a common passion. It’s a family. And precisely because this place holds such a special place in our lives, this is hard to write. We are doing everything we can to keep the school alive while we are prohibited from opening our doors. But, we need to be honest—our survival is far from certain. So, we are very humbly asking that those of our students who are fortunate enough to be secure in their jobs or who otherwise have the means, to consider paying tuition for June. Let’s be honest, it’s not likely that we will open in June. We hope it will happen by July. But, without a bit of a lifeline, we can’t guarantee that Elite will be there for any of us to return to when the shutdown ends. If there’s something you can do to help out, please get in touch with Jeff.

Thanks to all of our loyal students and friends. Stay strong. Be safe. We WILL be back on the mats again soon, as a family! ... See MoreSee Less

Thank you so much for participating in the online classes. I also want to thank all the instructors for taking the time out of their day to teach.

Parents, please make sure your child has the dummy to train with even for the solo classes. There is a link below on how to make a dummy.

Check out this week's schedule below!

Hey Team, here is the link for the Training during the week with the RMNU instructors and other students from other gyms.

Zoom is the leader in modern enterprise video communications, with an easy, reliable cloud platform for video and audio conferencing, chat, and webinars across mobile, desktop, and room systems. Zoom ...
View on Facebook
·Share

Hey Guy/Gals, I hope everyone is staying safe and inside during this time. I know that being out off the mat is driving you insane as it is I also. But I have some news for you in the meanwhile. We spoke other Professors and Coaches we are putting together a online training session during the week. It will be hosted on ZOOM and is open to all the current enrolled students. We will be starting this on Monday evening. This will be a kids session and adults following after. There will be instructors from different RMNU gyms hosting each night as well as Master Robson.

Hope this will help us over this hump without being able to train live but we all need to be safe and still stay sharp.

Please reach out or me (Shawn) or reply to this post and i will be contacting you to get you the link directly.

Hope you all are doing well and staying safe. Miss you all.
Oss. ... See MoreSee Less

Saturday night is going to be HUGE! Get your ticke

A good chunk of Elite’s purple belt squad at the

RMNU Ireland last Session of my trip. Loved every

Well... We've all tried and failed...and just when

Congrats to brown belt Shawn Carn @shizzx on his w

ATTENTION : there will be an open mat tomorrow mor

We're all here at the IBJJF DC open! #RMNU #Robson

We're always home! Come get your Sunday training a

Open mat at Elite will start at 12 today. It's the

April has been a phenomenal month for our competit

OPEN MAT AT 12pm TODAY! Eric will be opening up at

OPEN MAT AT 11 AM TODAY! Come on down to elite thi

Elite Jiu-jitsu will be in full support of this in